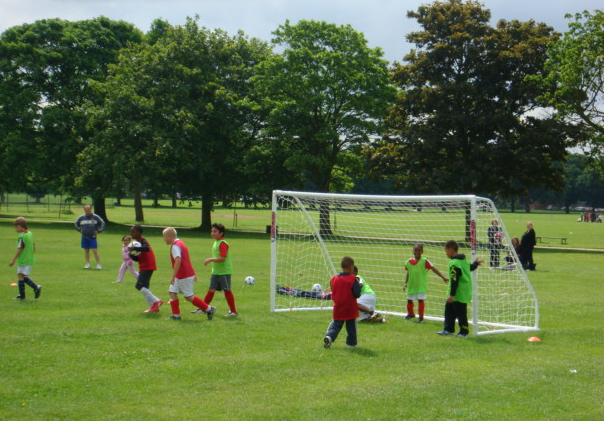 With teams returning back to training over the next few weeks, Pete Sturgess, FA National Coach for players aged 5-11, outlines ten top-tips to help get young players ready for the new season.

The tips below are based on guidance from the England DNA Foundation Phase project – which you can read more about below –  and are aimed at those working with young players aged 5-12 for a six week period before the season starts.

Getting young children ready for the new season is not the same as the preparation an adult player might be involved in. Pre-season for adults has long been associated with running laps and doing ‘doggies’ until exhaustion. If you are coaching children you must allow all sessions to be enjoyable, exciting and active. This should also be the aim at any stage of the season, not just through the summer.

Warm-ups for our young players should be engaging, enjoyable and active. Look to include a wide range of movements and activities that are fun to be involved in such as running, chasing, dodging, jumping, twisting and turning. Get the children laughing and out of breath.  Include throwing and catching where you can. Games like tag rugby or dodgeball are great warm-ups.

All players attend training so they can play football and have lots of touches of the ball. Make sure you use the ball in your sessions as much as possible.

4) Play a variety of games

Play lots of small-sided games using different numbers of players and on pitches of different sizes. Getting the players playing matches is a great thing to include early on in both an individual session and in the six week programme.  Try and play the format of football you play on matchday- this might be 6v6 or 7v7.

During the first couple of weeks find time to involve all the players as one big group (or two smaller groups) working in larger areas. This lowers the intensity at the start of pre-season and eases the players back into action.

6) Make things harder as the weeks go on

Smaller groups in smaller areas can be introduced as the weeks progress. 4v4 would be perfect after week three(particularly if for the previous two weeks you have played 6v6 or even 7v7). For each session think about how you can make it slightly harder for the players by increasing the time spent on the task.

Respect each child as an individual and adapt the session or challenge for them. Over the six weeks (and throughout the season) try to pair or group players together for different outcomes so that their individual needs are met more often.

If you train more than once a week, try to vary the kind of things you work on during sessions. Try to change the session theme so that the players are not always undertaking the same repetitive actions.

With all the activities and games you use try to give small amounts of clear and simple help and advice followed by lots of opportunities for the players to practise. Always add lots of encouragement.

10) Make sure that the players want to come back

It is very important that your summer sessions involve play, enjoyment and football. Playing games in training is vital so get the group into small-sided games as much as possible. Create something so special that the players cannot wait for the next session.